Book Review: The True Nature of God by Andrew Wommack 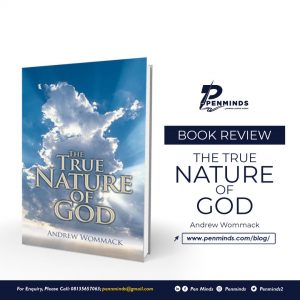 The book is an eye-opening resource that sheds light into religious misconceptions, removing the barriers that hinder believers from knowing and receiving from God.

The author begins by stating that everything we receive from God comes out of knowing Him.

“Faith is a direct result of knowing God better.”

He further explains that an understanding of the goodness and love of God towards us would take away the effectiveness of Satan’s weapons against our faith. He goes on to state that, “One reason God is discredited is because people don’t really take Him by His word.”

Chapter Two of this book helps us to discover the Grace of God shown to humanity in the old covenant even before the introduction of the law which brought sin consciousness to man.

The Effects of Sin

“In Genesis 3, we read about sin entering the world. Of course, you know the story.  God created Adam and Eve.  He was communing with them and walking with them in the cool of the evening.  Satan beguiled Eve into sinning, and Adam knowingly sinned against God. When they saw they were naked, they hid themselves from God.”

The following are the effects of sin as stated in the book:

The author goes on to say,

“Throughout history, people have attempted to justify their sin by finding someone who is “worse” than they are to compare themselves with. People will look at the sorriest example in the whole church and say, “If they go to church and are making it to heaven, I’ll make it.” That’s a terrible standard of comparison. People aren’t going to be measured by the hypocrites at church. People are going to be compared to Jesus (Rom.  3:23)!  Unless they measure up, they need a Savior. But it is human nature for people to compare themselves to others to excuse their sin.”

As the book progresses, the author goes on to explain the impact and purpose of the law to man.

The Law was not introduced for man to fulfill it, rather to make mankind realise that they need a Saviour and cannot be made right based on their works (Romans 3:19-24).

For by grace you have been saved through faith, and that not of yourselves; it is the gift of God, not of works, lest anyone should boast.

Through this book I understand that it’s easy to get prayers answered and our heart desires met if we take the focus off ourselves and on to Jesus. If we rely on Christ and what God has done for us through him than on our abilities.